A spectacular gash across the flat landscape

In the far south of the region, the massive Fish River Canyon forms a spectacular gash across the otherwise flat landscape. The canyon is regarded as one of the largest in the world, and is amongst the most spectacular sights on the entire continent.

The formation of the Fish River Canyon dates back some 350 million years when a valley subsided along fault lines to form the upper floor of the canyon. The gentle southward slope of the land caused the Fish River to meander southwards and over millions of years it has gouged deeply into the ancient rocks to form the lower canyon.

Although the canyon is some 160km long, the most spectacular section stretches from just north of the northern-most viewpoint downstream for 65km. The Fish River Canyon is up to 27km wide and has a maximum depth of 549m.Vantage points on the edge of the canyon provide awesome views of the sheer cliffs and raw beauty of the canyon.

One of the sights are the hot springs at Ai-Ais, which are beneath the towering peaks at the southern end of Fish River Canyon National Park. They are rich in choloride, flouride and sulphur, and are reputedly theraputic for sufferers of Pheumatism or nervous disorders.

The San have a legend that the wildly twisting Fish River Canyon was gouged out by a frantically scrambling snake, Koutein Kooru, as he was pursued into the desert by hunters. However, the geological story is a bit different – Fish River Canyon is actually two canyons, one inside the other, which were formed in entirely different ways. 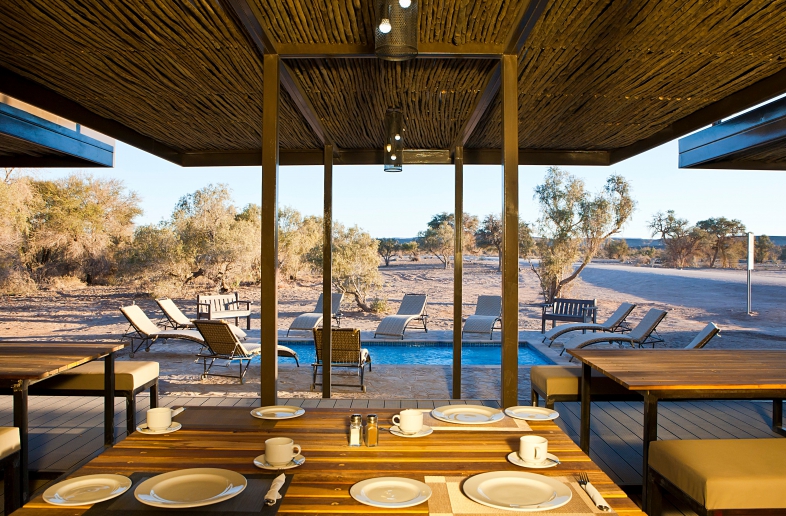